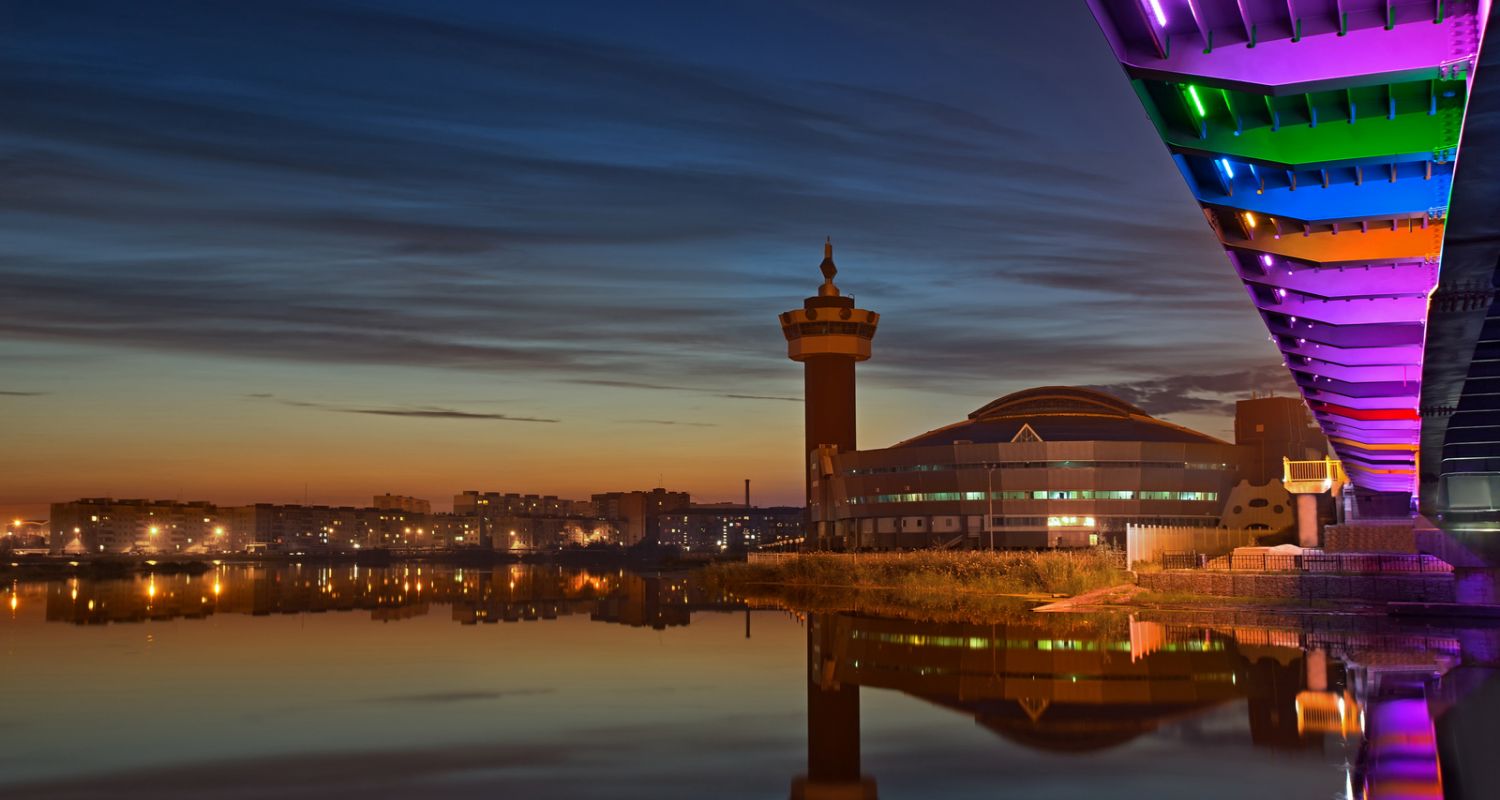 So I returned after 13 years of living in Moscow (about 2 years +/-) and Moscow region (10+ years) in my native city of Yakutsk (born and lived until 2004) and I want to share my impressions of life in Yakutsk and to hold a small comparison of changes that occurred, for approximately the same period of residence, in the Moscow region, Moscow and Yakutsk.

Immediately I can say that comparing life in Yakutsk and life in the suburban provinces will be extremely difficult, at least according to economic indicators.

Life in the Moscow District has its advantages against the same, the minuses of life in Yakutsk: a relatively measured rhythm, here and there, even in some places a good ecology, a lack of high competition for freelancers, property prices slightly lower than Moscow and other positive and negative points about which, I, today, will try to briefly tell …

To live in a small town near Moscow is somewhat easier, if you are strong in any craft and your tongue is hanging, otherwise: “Free cash!” or work in the factory, etc.

A significant part of the budget is devoured by spending on food and housing. If you have your own apartment, house, or place where you can live without spending 150$+ on it, then you definitely got lucky.
However, in Yakutsk, the tendencies of development in the private sector are the most, that neither is explicit, but also with its site / house there has always been and will be a hemorrhage.
I’ll list the things that you’ll have to face if you decide to rebuild your house with a plot (or without):

If you are going to live in an apartment, then for a one-room apartment, communal workers will have to give 75-105$/month, in winter – a thousand or two more, because there is also heating, and the sun sets very early.

One of the disadvantages of the northern capital – the prices for renting housing, they usually start from 150-225$ and end at around 601-752$.

Unlike the province, where the price tag starts from 120$ and ends at 451$ with an focused toward the center of the city, in Yakutsk you can not get a normal flat for that money even on the outskirts, everywhere there will be bugs or shabby “grandma style”, and This price tag on the “normal apartment” starts from 376$ straight as in Moscow. Often people live here either in long-established residential areas, or in suburban areas such as the Markha.

According to the stereotypes prevailing in the country, the Yakut people are all rich. Salary is received in gold bars, on the way to work they are kicking diamonds.
Over the past few years, we have been consistently among the ten most “earning” regions of the country. According to the Federal State Statistics Service for the republic in January-October last year, the average earnings of the Yakut population amounted to 719$, while we are decently ahead of the average for the country, which is 488$.
Our average salary has withstood even in a crisis, and therefore life in Yakutsk flows at its own pace and no one particularly notices any negative changes.

For some reason, local people consider unfair the assessments of outside experts on wages, on the other hand, it’s not that simple either …
The whole thing is that there are a number of professions that pull the others up:

Such indicators are explained by the low population density that generates this paradox: the share of shift workers and those who receive large salaries outweighs the salaries of workers with more modest incomes. In all these occupations, there is a steady rise in wages. At the same time, the lowest-paid occupation is farming and hunting – 210$.

Here is the list of industries that are now actively recruiting employees (in decreasing order), this information will be useful if you want to relocate:

It is worth noting that among the most popular specialties there was not one, whose wages would at least approach the average.

A little later I will list the most popular professions in the republic and their average earnings:

Network stores such as “Magnit”, “Pyaterochka”, “Dixie”, “Perekrestok” and others are simply no, so come to the rescue alternatives such as “Tokko”, “Almaz” and other “local networks”, however, in fairness, you can say that in addition to “Tokko” and “Almaz” there is no horseradish in fact and not, but the assortment is quite adequate, but otherwise – defaulted private shops or “U baby Toni”, etc., but even there is almost all the default basis:

The average price tag here is higher than the Moscow price index, about once and a half times, the price tag does not vary as much as in Moscow – Moscow suburbs, the difference is rubles, not 15-30¢ as in Moscow and Moscow District.

In the Moscow region, the condition always works that you buy food in “Magnit” or “Pyaterochka”, and at such times you can count on a mid-ceiling price tag of 150-225$.

This is with the most modest calculations. You can still save, but then you have to fress every day, wicked, scourge pack with mayonnaise or instant noodles from, fucking, “Ashan”.

One big plus of “U baby Toni Baba” type of shops – in 90% of cases there are terminals for paying by card, yes, even in freeload roadside kiosks they are, and now most have switched to terminals with PayPass support, often you saw such in Moscow or MD?

In winter, with the products that we are used to seeing all year round there are interruptions, the river, through which all the dry cargo ships pass, stupidly freezes (well, at -58F…) and all sorts of things, such as Dr. Pepper, or some Pepsi Wild Cherry, you can stupidly not find, but still enrages when there is no salad in Subway (he, by the way, too), then a lot of “indigenous people” or “Golden Youth” are hammered in there and, for lack of a salad, they start destroying the stocks of alcohol, they probably think that if the alcohol runs out, they will bring salads faster, yes …

Lovers also have a cultural time to spend, sometimes it’s sad, selling alcohol starts from 2AM, and ends at 8PM, so if you want to plunge culture to spend time – it’s only in drinking establishments or clubs like: “Zodiac”, “Remix”, ” Chaplin”,” Europe”.

On transport per month can go up to a 30$, subject to a direct road to work and the price of a ticket for a bus at 38¢, does not match our 75¢ + in the Moscow District, right?
On the other hand, there are very developed taxi services such as Maxim, inDriver and others.

Maxim provides more convenient functionality in the mobile application, however, it’s problematic to leave it from suburban areas, take at least my case: From the “Beloe Ozero” area on weekdays from 10 minutes of waiting for a driver and another 10-15 minutes of waiting until he rolls up, and then, if you do not get lost (here it often happens), or stand next to another house and taped “On the spot, waiting for the client.”

InDriver, the application is less functional (until they learned how to accept cashless and there is no deferred trip), but there is a system of bidding (who used that knows), which allows you to get where you need as quickly as possible after paying a total from 75¢ to 1.5$.

Who lucky work in a walking distance, but the bulk of each morning saws from one area to another, or chasing the bikes, here, by the way, this mode of transport is quite developed, I often see cyclists.

Nevertheless, people do not disdain public transport, very many people drive on it, buses are crammed up even at lunch time, or in the evening, closer to 9PM+, which is surprising, because in the MSC or MD in buses and minibuses are driven only by pensioners or even schoolchildren, and even then, they are not often met there, and here almost everything is driven by public transport: policemen, representative people, students, schoolchildren, just young people.

Unfortunately, over the years that I was not here, Yakutsk took over the “world sore” whose name is “traffic jams,” and, given the fact that, on average, there are 2 cars in each family, traffic jams are extremely unpleasant.

Entertainment in Yakutsk at least it is enough, I will list the basic:

In fact, there is a very developed sport, themed parties, and about the dominance of “board gamers”.
In theory, if you are completely fed up, you can also call a prostitute, the price tag for this type of “leisure” ranges from 100$ (low-level putana) to 500$ (VIP level).
There is quite a good developed social Internet culture, everywhere they advertise something and add a link to Instagram or VK, instead of the usual mobile communication, Whatsapp prefer, and this is with such a shitty internet, but probably everything is enough.

Also, every year there is a small cultural event, on the threshold of the day of the doctor, to support a healthy lifestyle, I asked the local people and it turned out that they have, in general, an absolute norm, there you have a small fair, and all sorts of tasty food and support media, a lot of young people, children, fountains there, in general, fabulously.

Even in Yakutsk J/K-pop culture is well developed, here, for example, recently came U-Reca, and a couple of days before the concert, I happened to go to the studio where they answered live on the air and answered a couple of photos, even the local ones met them very warmly and there was great support, I did not see such support even at the big concerts that they collect Local, Moscow (especially near Moscow) groups.

And in general, almost any city events are met with very strong support, children everywhere, young people who drink on such days are almost invisible, well, and in places where such events are held there are none at all, policemen are closely following all this.

I also like to mention a couple of plague places in the city – these are your favorite Tavern The Haunt and UnderBar, as well as GeekCafe Ykt.
If there is a desire to sit in a cozy place, pee a code, drink a beer and chat then you definitely in Tavern The Haunt, if you need loud rock music and the atmosphere of eternal tusych – welcome in UnderBar, well, if you are geek – mercy I ask in Geek Cafe ^^; By the way, I can not fail to mention the excellent team in all institutions, but this is already in other articles.

Summing up, I can say this:
Cultural, however, like secular life in Yakutsk is much more developed and more interesting than in the same suburbs, I can not say about Moscow, I did not hang much there.
Young people are uniquely more progressive and developed much better than in the suburbs, the absence of “mud” factors and strong local support for young people, however, as well as propaganda of a healthy lifestyle.